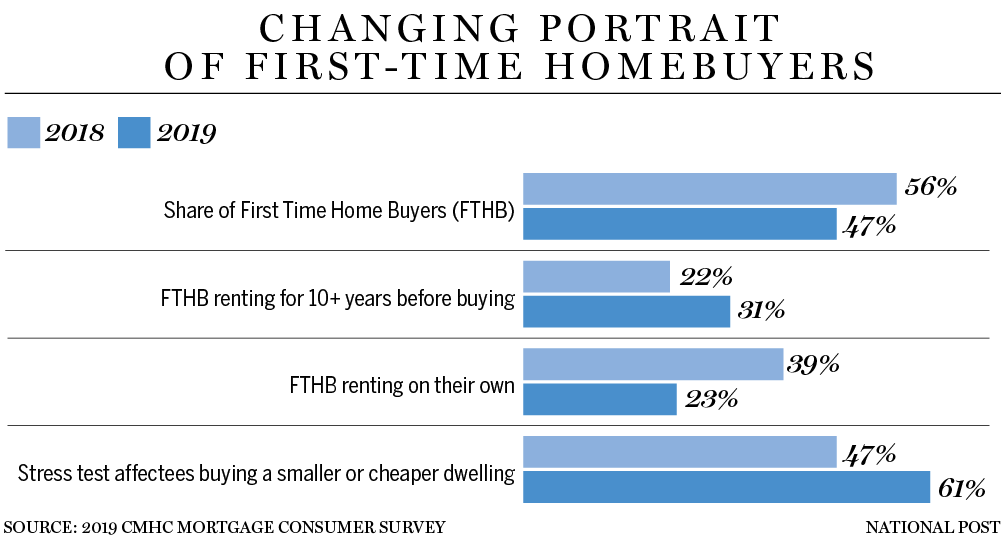 One in four buyers say they had to cut back on expenses, rely more on savings and buy a smaller home

The recently released CMHC mortgage consumer survey helps unpack the arguments on the impact of the stress test. The CMHC surveyed 1,385 homebuyers across Canada who had undertaken a mortgage transaction in the past 18 months. This implies that some respondents reported on their mortgage-related experience from 2018.

An exciting feature of the survey is the distinction between first-time homebuyers, who constituted 47 per cent of the sample, and the repeat buyers representing the other 53 per cent.

The homebuyers’ top concerns in 2019 were housing affordability, housing size and proximity to public transit. These concerns coincided with housing prices declining across Canada in 2018 as prices remained lower than the peak prices reached in either 2016 or 2017.

Many industry observers credited the stress test for the decline in prices and the erosion of housing affordability because homebuyers had to qualify at a mortgage rate approximately two percentage points higher than the contracted rate. The 2019 survey, though, presents a positive impression of the stress test among homebuyers.

The survey reported that 65 per cent of the buyers believed the stress test would “keep more Canadians from taking on a mortgage they can’t afford.” However, one in five homebuyers acquired a dwelling that did not meet their needs.

An interesting picture emerges when one compares the share of first-time homebuyers respondents in 2018 and 2019. The 2018 survey, completed in April 2018, interviewed 4,000 respondents who had undertaken a mortgage transaction in the past 12 months. This implies that most respondents in the 2018 survey would have reported on their homebuying experience before the stress test’s reach was broadened in January 2018.

Other statistics reported in the survey are indicative of the higher affordability burdens even when housing prices had declined from the peak observed earlier.

At the same time, no fewer than 76 per cent of the respondents reported that the changes related to the stress test “had little or no impact on their decision to buy a home.” However, of the remaining 24 per cent (one in four homebuyers) affected by the stress test, some compromises were needed on the path to homeownership. Most  cut back on other expenses (60 per cent), relied more on their savings (59 per cent) or bought a smaller home (52 per cent).

Whereas 47 per cent of homebuyers affected by the stress test purchased a smaller or less expensive home in 2018, a much larger share of 61 per cent reported the same in 2019.

The increase in household debt burdens, primarily because of mortgage-related debt, is also reflected in the survey. Compared to 2018, when 19 per cent of buyers reported their debt being higher than expected, the share increased to 23 per cent in 2019. Of those struggling with making regular mortgage payments, 73 per cent cited the credit card debt as the reason.

The comparative stats further revealed that buyers with less than 20 per cent of the down payment increased in 2019 compared to 2018. Furthermore, the 2019 survey found a slight increase in the share of those “who didn’t have enough saved for a larger down payment.”

CMHC’s 2019 survey of homebuying offers valuable insights on how homebuying has changed over the past few years. Though the survey periods do not permit a strict before-and-after comparison of homebuying concerning the stress test, still the indicators reported suggest that in 2019, FTHB accounted for fewer homebuyers, comprised of a larger share of those who rented for more extended periods, and their savings increasingly fell short to qualify for a mortgage.

Murtaza Haider is a professor of Real Estate Management at Ryerson University. Stephen Moranis is a real estate industry veteran. They can be reached at http://www.hmbulletin.com.